Sadly, this is not a typical post about gadgets or my latest Amazon purchase. This week my circle of friends lost someone who was also a father of four and whose wife is also one of our friends.

On Wednesday, Bradley Ayers unexpectedly passed away, leaving behind the four children and wife he adored. If you can, please donate in order to help his children make it to his funeral and help his wife relocate closer to family. Any assistance will be greatly appreciated.

The Short Version: The Philips VOIP0801B/37 Skype Phone is not fully compatible with Skype and Mountain Lion. The microphone and speaker work fine but the keypad does not.

I’ve had a Skype account for some time though I’ve never used it very often. In general, it serves as little more than a backup calling system. I’ve been thinking about using the service more often at home so I decided to try to find an inexpensive device that would serve as a dedicated Skype phone.

Earlier this week I received a Philips VOIP 080 Skype VOIP Travel Phone (VOIP0801B/37) that I purchased from Amazon for about $30. Unfortunately, I should have read several of the reviews more closely when trying to determine whether or not this would actually work with my Mac (10.8 Mountain Lion).

It partially works. The Mac recognizes the device connected via USB and the Skype software can be configured to use the microphone and speaker. However, the keypad appears to be useless. Dialing, etc has to be done from the Mac.

Before I purchased this I was well aware that Macs were not officially supported but I had the impression it would actually work. Perhaps I’ll stumble upon some trick to get the keypad working with the Mac but for now I’m stuck with a device that doesn’t work as I had hoped because I didn’t research it adequately. 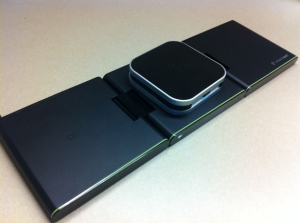 Earlier this week I decided to add another component to my Powermat system. This piece will probably stay at my office and travel with me when I go out of town.

I ordered a Powermat Travel Mat Combo Pack. It includes a folding Powermat charging station that can charge three devices at once. It also includes a Powercube kit with additional adapter tips and a Powermat portable battery pack (this is a smaller, cheaper battery that is different from the other device I recently purchased).

Pricing seems to vary. I paid about $30 for the entire kit. Overall, I really like this kit. It has some pros and cons that are worth mentioning.