This seems to be one of the more popular posts on my blog. Well, I’ve had two of these locks in place for over five months and I haven’t had any problems with them. I corrected all of the issues mentioned (except repainting). One item to consider – you might want to have a set of wood chisels on hand.

Our entrance doors and some bathroom doors were upgraded before we owned our house but none of the bedroom door locks have been replaced so they still use the old skeleton-key hardware. I wanted to add privacy and some additional security so I searched for a good mortise lock to replace the old ones. I eventually found this (after a lot of searching). I received it yesterday, installed it, and it’s working great.

Not all parts fit perfectly, though that’s not a flaw of the lock. More likely there are just several different types of locks that were made with different alignments. In the end I won’t have to make any major changes. The plates aligned about a quarter of an inch higher than the old ones so I’ll need to repaint one side of the door and finish the other (in very small areas). The strike plates don’t match up. At the moment the knob part doesn’t latch in – I’ll need to remove the old strike plate, remove a small part of the frame, and install the new one (but even without doing this the latch locks in just fine).

I was able to use the old crystal knobs instead of the included ones. I had hoped to be able to use the old cover plates but part of the latch is built into one plate and it does not look like it can be adapted to fit the old ones. However, it looks good and works great and I’ll be ordering another one for our guest room.

Update: I ordered a second lock set and installed it on the door of our guest room. That door is a left-handed door but the lock can be reversed by opening it up and moving the top lock around.

Update (11/19/2010): Both locks are holding up great. It’s hard to tell from the photos but so far they seem to have a reliable, solid construction. 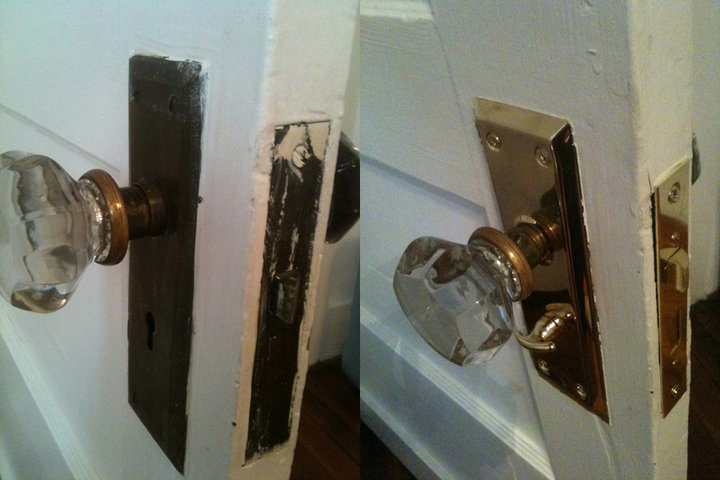