We purchased a house last summer. Overall its been a good experience but after moving in we discovered a couple of expensive problems that hadn’t been identified in the home inspection or mentioned by the sellers (that’s another post… at the least though I’ll probably refrain from offering details here). One of the issues we’ve been tackling is the replacement of our packaged units. The house is rather large and has two units. The ones that were previously installed were 25 years old and had issues. Neither A/C performed well. One furnace was completely dead and the other leaked gas off-and-on (probably not igniting properly). Fortunately, we invested in a home warranty when we closed on the house and so far it looks like it has paid for itself several times over already.

Perhaps in the future, once all of this is settled, I’ll mention the company that we used. Overall, from a final standpoint, it looks like we’ll only be paying 1/10th the total cost for items not covered under the warranty such as disposal of the old units and duct work. If everything is paid as we expect then it will have turned out to be a great deal but from a customer service stand-point we’ve had many headaches. Specifically, there was a glaring lack of communication from the warranty company.

But it’s nice to be able to leave the heat on at night and when we’re not at home. 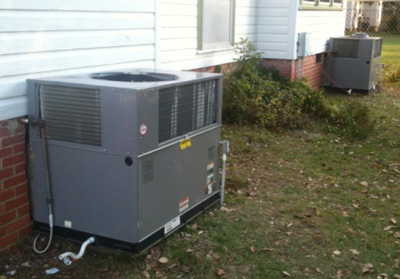