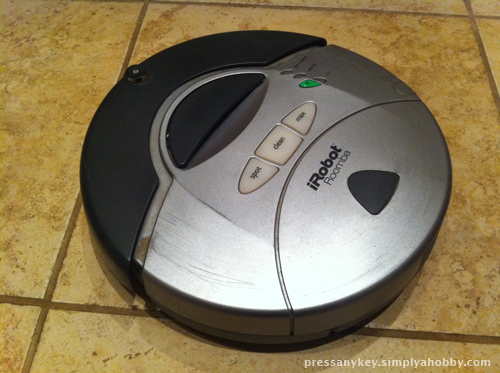 Updated 04/11/2012: I’ve reversed my opinion on using the Roomba on wood floors, especially in an old home. Lately I started to notice that the finish of the floors in all rooms no longer appears as thick and shiny as it did when we first moved into the house. This includes the rooms we recently refinished.

The final piece of evidence is the near lack of finish around some of the air vents, which are places where the Roomba frequently gets hung up. I’m convinced that repeated runs of the Roomba brush across the floors has eroded the finish much faster than would normally occur from foot traffic.

I’ve stopped using the Roomba on the wood floors but it still gets some use on the tiled areas.

About two years ago, just after we purchased our home, I bought an iRobot Roomba 415. It was on sale at Woot for about $120, which was a good price at the time. Even then it wasn’t the newest model but I was confident that it would work well.

The Roomba came with two virtual walls and I purchased two more a couple of months later. The virtual walls are used to restrict the Roomba to certain areas. They do exactly what their name implies and work by sending out IR beams, which the Roomba detects and avoids.

It wasn’t long after I bought the Roomba before the charger quit working so I had to purchase another. Fortunately, that charger is still working.

I received an extra battery as a gift recently, which makes it easier to clean the entire house without waiting for the batteries to recharge. However, this requires that I charge both batteries ahead of time – the Roomba charger only charges via the Roomba itself so I can’t charge a battery while I’m also using the Roomba.

Maintenance is required on a regular basis. I’ll usually let it clean three rooms before I stop and clean out the brushes (a pair of scissors and a small, flat-tip screwdriver work well – I never bother using the supplied cleaning tool).

Our house has wood floors with only a few rugs and it does a good job cleaning. This model’s only significant weakness is its inability to effectively clean along the walls. There’s a side brush that helps with this but it often misses much. The brush actually broke off my Roomba and I haven’t been able to get it replaced, yet. However, that hasn’t made much of a difference anyway.

In general, I don’t leave all of the sweeping to the Roomba. I’ll usually grab a broom and sweep along the walls to push the dirt and dust out where the Roomba can sweep it up. Despite this apparent shortcoming, it does an excellent job of vacuuming dust that a broom and dustpan will usually miss.

I don’t remember if the 415 is compatible with the charging dock, but I decided there wasn’t much of a point in getting the dock or setting up schedules – the Roomba must be able to “see” the charging station to return when it’s low on power and I’m certain it would get lost in another room and not be able to find the dock. Perhaps if I had two or three Roombas it might then work in our home.

Overall, I think the Roomba is a great device. I’d like to purchase one of latest models, but they’re usually around $600. At that price point I’d prefer to either buy several older models… or just use broom or regular vacuum.

The Roomba does require some maintenance, but I find it much simpler than spending time using a broom. It also doesn’t kick up dust, which is also a great benefit.