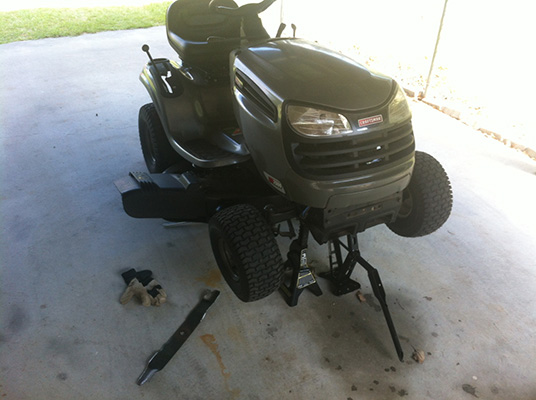 I wanted to attempt to sharpen the blades on our Craftsman Lawn Tractor. It’s hit a lot of sticks since we bought it about three years ago and I’ve noticed that it hasn’t been cutting tall grass cleanly.

Rather than drop the mower deck I decided to take an easier route. Unfortunately I didn’t have a set of ramps sitting around (or a way to build them) so I grabbed the jack from my car.

I first removed the key from the ignition, set the parking brake, and then placed wheel chocks behind the rear wheels.

Finding a good place on the front to place the jack was a bit tricky. If you attempt to do this then make sure that you don’t bend the wrong piece of metal. I’ve never relied on just a jack by itself so once I had it up high enough I placed a jack stand next to it and then let the front of the tractor sit on both the jack and the jack stand.

The next thing I did was gently shake the tractor just enough to ensure that the jacks and tractor were stable and wouldn’t shift once I started removing the blades.

Removing the blades wasn’t too difficult. I had a thick glove on one hand that I used to hold the blade with and then held the ratchet in the other one. It did take some force to remove the blades.

Before fully removing the blades it may be a good idea to make note of the orientation of each blade so the new blades can be placed in the same position.

If you haven’t done this kind of work before you may want to reconsider making the attempt. As with anything like this, safety precautions should always be taken, including those that I may not have mentioned.

Updated 11/18/2012: I’ve used the mower from spring into fall and nothing out of the ordinary occurred as a result of this work.