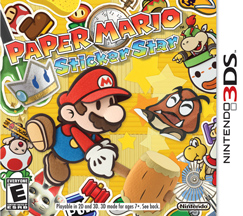 I’ve had a Nintendo 3DS for a while and lately I’ve actually played on it more than my other consoles, most likely because it’s just easy to pick up and play. About a month ago I purchased Paper Mario: Sticker Star.

Surprisingly, I actually finished the game. This has been a rare thing over the past few years. Often, I purchase a game and take my time working on it. Even Mass Effect 3, which I was anticipating for some time and pre-ordered, was a game that I spent several months playing off-and-on before I finished it.

For Paper Mario: Sticker Star I opted to purchase the download version instead of purchasing the game cartridge, despite my reservations on this topic. I did this simply to see if there was any benefit. Sure, it’s nice to have the game installed and not require a cartridge, but now that I’m finished with the game it has no resale value and I can’t loan it to someone else to play.

That doesn’t affect the gameplay itself. I really enjoyed playing Sticker Star. It was just a fun Mario-based game.

Does it have any replay value? Not much. In fact, it may have less than Super Paper Mario for the Wii. It’s certainly fun and worth playing but most gamers probably won’t find themselves playing this game over and over again once it’s been completed.

The use of stickers worked really well and it also gives players a more flexible way to defeat various bosses. For example, some bosses are highly vulnerable to specific stickers. However, sometimes it’s just as easy to load up on very powerful “Thing” stickers and really smack down a big enemy.

I’ve noticed a few reviewers have stated that the game is best played in 2D mode instead. I disagree. While the game can certainly be played well in 2D I think the bit of depth in 3D mode really adds to the style of the game and, in some cases, it can make figuring out certain puzzles much easier.

There aren’t many good, fast ways to grind for coins but you can find several resources and forum posts recommending World 4-1 “Snow Ride”. This does appear to be the best place to quickly rack up coins. When you first enter the level simply go over to the first question block near a shiny Goomba and collect the Ice Flower that it drops. Then, use that in a battle against the shiny Goomba (which is actually five Goombas). If you time it right you can take all of them out with only one sticker and gain bonus coins from a perfect round. Once finished (and you’ve collected anything dropped after the battle) simply exit the level, re-enter, and do the same thing over and over). You can typically gain 50+ coins each round.

If timing is a problem you can purchase red shells, which can be used to take out all five Goombas at once more easily. However, each shell will cost 40 coins so the overall take is considerably less and it takes much longer to build up coins because much of the profit will go towards purchasing more shells.

Once you have your timing down with the Ice Flower you’ll still come out ahead even if you make a mistake every few battles and don’t earn the bonus from a perfect round.

Finally, here are a couple of good guides to help, if needed: