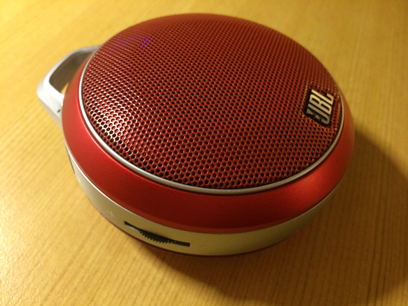 A couple of months ago I finally decided it might be convenient to have a portable Bluetooth speaker that I could use to play music from my phone or other device. The idea was that it would be something I could use when we’re playing a card game or outside grilling. After scrolling through numerous reviews on Amazon I encountered this little device, which I eventually received as a gift from my wish list.

The JBL Micro Wireless Ultra-Portable Speaker provides amazing sound considering its size. According to the documentation it will run on battery for about five hours, though some reviewers have experienced longer usage times. It’s also possible to use the device while recharging it.

Considering its size and relatively low cost (about $50), I am very impressed by this piece of tech. So was my wife. The first time I tried it out she immediately stated that she wants one. Friends have made similar comments when showing it to them.

There are other very similar JBL models. This particular one has a built-in bass port.

It’s been useful in cases when I didn’t expect it. For example, the turn-by-turn navigation instructions from Google Maps sounded excellent.