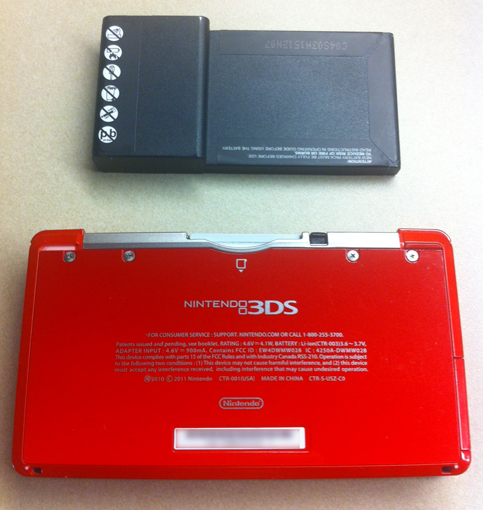 In the above photo the size of the replacement, extended battery is shown next to the 3DS.

The Short Version: I purchased a 5000mAh Li-on Extended Battery for the Nintendo 3DS for about $20 via Amazon. It significantly increased the charge capacity of the device. I found the larger bulk of the entire system to be an acceptable trade-off for the extra play time this battery provides.

This week I decided it was time to replace the factory battery in my Nintendo 3DS. It wasn’t because it failed to maintain a charge but simply because it didn’t last as long as I would prefer. Now, I wasn’t draining the battery from playing games. In fact, most of the time I drained it simply by leaving it in stand-by but not on the charger. However, I also wanted to upgrade the battery because I thought I might begin playing the system more frequently and that it would be nice to not feel tethered to a power cable when I’m at home.

I shopped around and started out researching the Nyko Power Pak+ for 3DS, which looked promising. But instead of getting the first thing I found I kept looking around and eventually stumbled upon a more generic battery with a higher capacity than the Nyko battery.

Earlier this week I purchased a 5000mAh Li-ion Extended Battery for the Nintendo 3DS. It boasts even more playing time. Hopefully, it will work as advertised.

The battery comes with a cover, which is needed because the new battery is much larger than the original battery and protrudes out a good deal. Without the battery cover it would look extremely awkward.

I haven’t used the battery for very long but so far it seems to work well. I’d prefer to have a different color for the battery cover but it didn’t bother me enough to spray paint it.

While I’m satisfied with this add-on there a few caveats to be aware of. First, it does add more weight to the system. I played a few rounds of a couple of games and it didn’t bother me at all but smaller, younger hands might find it more tiresome. Also, it won’t work with the charging cradle. The larger battery increases the height of the unit when sitting flat so it won’t come in contact with the charging connections.

The original power adapter that comes with the 3DS is capable of recharging this battery. When plugged in the LED lights up just as it did with the original battery and the charging indicator appears on the top screen.

My GameStop DS/DSi/3DS charger does not work with this battery. When plugged in the charging light doesn’t come on and the icon on the top screen does not show that it is charging. I attempted to plug the USB cable that came with the kit directly into a self-powered hub but that didn’t work.

Overall, assuming I don’t experience any problems later, I think this is a good purchase at about $20.

Updated 08/17/2012: So far the battery has performed very well. I plugged the system into the charging adapter overnight on Sunday. From Monday through Friday the battery level only dropped one bar, which I’m assuming indicates that it still has 50%-75% charge remaining. During this time the system was never powered off – it remained in stand-by with the wifi enabled the entire time. In addition, I played several brief sessions of Mario Kart 7 and Super Mario 3D Land. I haven’t experienced any odd issues yet. The battery doesn’t feel warm during play sessions or while charging. If it continues to work this way it will prove to have been a worthwhile purchase.

Updated 02/19/2013: As far as I can tell this battery works almost as well as it did when I first installed it last August. The only oddity I’ve noticed is that sometimes, if I charge the system overnight using the AC adapter, when I wake up the charging light on the 3DS is flashing. If I unplug the cable and then plug it back in it will resume charging. My only guess is that the 3DS circuitry has determined the battery should already be fully charged.

I haven’t noticed any problems. The battery still holds a good charge and can probably stay in stand-by (with StreetPass enabled) for nearly a week.

I’m even able to charge the 3DS using my PowerMat charger (and so far I’ve never noticed the issue with a flashing charging light when using the PowerMat).

Updated 07/18/2013: The status of this battery seems to be about the same though I don’t play the 3DS as often these days so it spends most of its time in stand-by.

Comparison of extended battery (top) in relation to the original battery (bottom).