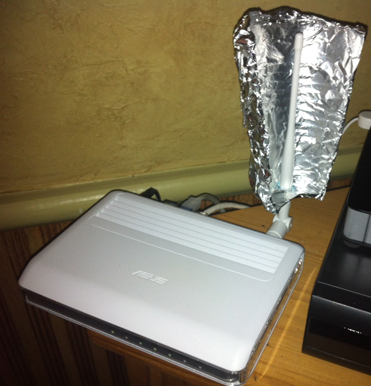 OK, this one isn’t a solution that I’m positive is really making much of a difference but it’s worth mentioning. Ever since my Airport Extreme Base Station partially bit the dust due to a power surge I’ve been using an inexpensive ASUS wireless router at home. Signal coverage isn’t as good as it was with the Apple device but it covers most of the house, at least to some degree.

Last night I experienced issues with Xbox Live. The cause may have been an issue with my ISP or the Live service. I wasn’t sure but I decided to attempt to extend the wifi signal a bit.

Recently, I came across several more elegant examples of this method. I didn’t have the components laying around so went for a much simpler version, though it’s one that I don’t think my wife is going to allow to remain in the living room (I can’t blame her for this – it’s an eyesore).

I grabbed a Solo cup (unfortunately we were out of the red ones so hold on humming the song in tribute) and cut it in half with a pair of scissors. Once halved I grabbed some aluminum foil and wrapped it around the cup. I could have just affixed it to the back of the cup half but I decided to just go all the way around it (this was just an experiment so there wasn’t any point in trying to make it look better). Attaching it to the antenna was simple. I cut a hole in the base of the cup and then slid it onto the antenna.

I think it’s increased signal on the far side of the house slightly. It’s not much but it may have added about 10 or 15 more feet of increased signal strength. Considering how simple this is it might be worth trying if you’re desperate to add just a slight bit of additional coverage to a specific part of your home. Note that since the cup is merely reflecting more of the signal in a specific direction that it will reduce the signal on the opposite side. This is actually an advantage in my case since it’s by an outside wall and thus the others side points out toward the street where I don’t need to increase the coverage.