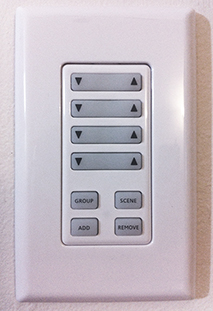 The light switch in my Man Cave is in an awkward position. Instead of being near the door it’s farther into the room on the other side of a fireplace mantel. Basically, this means that in order to turn on the light I had to stumble in the dark to to the switch.

The switch controls a light/fan so the only way to replace it is with a proper fan/light controller. I haven’t inspected the wiring yet so I haven’t looked into replacing it (though I may do that in the near future and I could still link it to the new remote).

A while back I opted to just setup a lamp with a simple X10 module (I’ve been using a standard, compact fluorescent bulb so an appliance module must be used) and combine that with a wireless X10 slimline remote.

It’s worked alright for a long time but the usual X10 signal problems apply so sometimes it required several key presses before the X10 module would respond (and once in a while it refused to work at all). I decided to replace this combination of modules with a Z-Wave plug-in appliance module and a GE 45631 Z-Wave Wireless Keypad Controller.

Considering what this device can do I think it’s a bit overpriced at nearly $50. However, that being said it works great and doesn’t feel as cheap as the previous X10 slimline switch. In fact, even though it’s stuck to the wall using the included adhesive strips it feels like something that was installed into the wall. Also, these devices are probably typically used with multiple Z-Wave modules (I’m currently using it with only one) so the cost may be more justified in other situations.

Since I’ve added it I haven’t had a single problem. No signal loss or delays and the corresponding light comes on and goes off immediately. It’s also nice to know that I can now reliably control this light via Indigo.