Note: To pull off this trick you must have acquired Revali’s Gale.

I’ve put several hours into playing The Legend of Zelda: Breath of the Wild and I’ve thoroughly enjoyed it. But it’s time to wrap up the core experience so I can move onto other games like Super Mario Odyssey. Earlier this week I completed the two remaining dungeons and over the past night and a half I’ve spent time building up healing items, Ancient Arrows and other inventory items that I guessed would be useful in the final assualt against Hyrule Castle.

But after spending only a short amount of time within one of the lower castle entrances my Hylian Shield broke so I temporarily abandoned my quest and returned to Tarry Town to purchase a replacement. After jumping back to the shrine nearest the castle I decided to try a different approach.

Instead, I ascended to the top of one of the spires guarding the castle boundaries and from there I floated almost to the entrance of the last room with only one short stop on the way. It’s impossible to actually climb the spires but it is possible to stand on the various raised designs that cover their surfaces. By using Revali’s Gale I was able to reach the top with the most difficult aspect simply being the wait-time required for the Gale power to recharge after three uses. I don’t remember the exact number of jumps I used to get to the top but I think it was around four; it required two recharge periods. 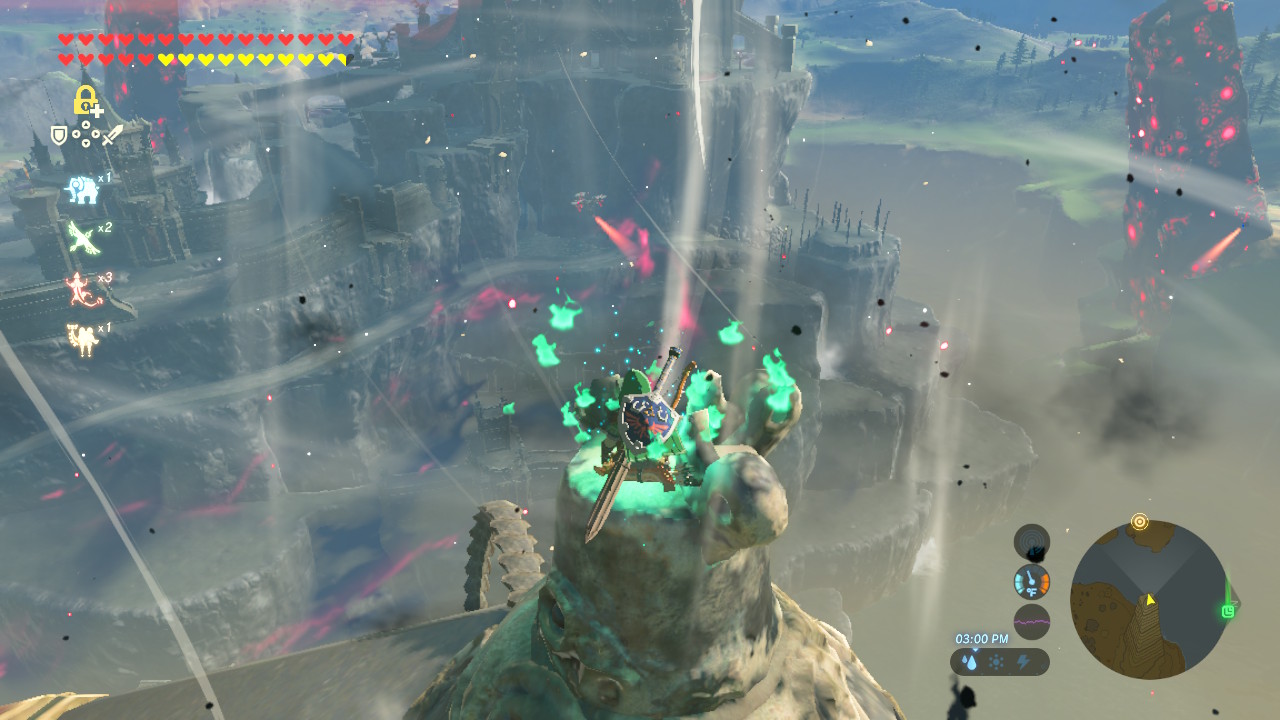 Once at the top I climbed on top of a dead Guardian and from there used Revali’s Gale once again, except this time I aimed for the upper areas of the castle. From the spire that I used I wasn’t quite able to get to the entrance in a single glide. I had to stop on a wall not very far away from the entrance. It was a fortunate spot as it provided cover between two Guardian turrets, one above and to my left and the other off to my right and lower than where I was. I still had another use of Revali’s Gale before a recharge so I used it again and glided past the remaining dangers and right into the entrance and hallway to the last room, where the final battle against Gannon begins.

Having not fought my way through the castle I can only assume that this saved me a significant amount of time, as well as inventory.

One thought on “Breath of the Wild: The Man in the High Castle (Entrance Shortcut)”